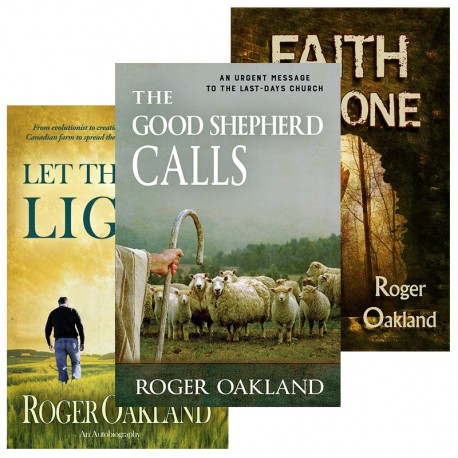 500 Item in stock items in stock

LET THERE BE LIGHT

Roger Oakland heads to university with the morals and values of his Christian parents intact. When he enters school, he believes in God as a Creator, but soon exchanges this for Darwinian evolution. After graduation, he begins teaching biology (with an emphasis on evolution) at the same university. Challenged one day by a young Christian student, Roger mocks the whole idea of Creation and God.
Through a series of painful circumstances, including the death of a baby son, he begins searching for answers to life - until one day he has a dramatic experience when hit with the realization that God created everything.
Becoming a creationist and later a committed born-again Christian, Roger's life is radically changed, and he is filled with a passion to tell others about God. Little does he know at the time that he will travel throughout the world to share his message.
Through his research, he finds a connection between evolution and the New Age. He discovers that multitudes of people are rejecting the idea of a Creator God and replacing it with an impersonal panentheistic "God." Much to his alarm, Roger learns that New Age concepts, such as this evolutionary "God," are being absorbed into mainstream Christianity.
As time progresses, Roger realizes that the Christian church is heading down a dangerous road of apostasy. He comes head to head with Christian leaders whom he learns are guiding believers toward a one-world religion via the Roman Catholic church through mysticism and the emerging church.
The cost of telling the truth and warning the church is high for Roger Oakland. Within his own denomination, Calvary Chapel, he begins to see signs of spiritual deception. He works tirelessly to teach and warn about the coming apostasy. Eventually, he realizes that both he and his message are being rejected by leaders of the movement that he tried to support for so many years.

Is the emerging church movement just another passing fad, a more contemporary approach to church, or a bunch of disillusioned young people looking for answers? In fact, it is actually much broader and is influencing Christianity to a significant degree. Grounded in a centuries-old mystical approach, this movement is powerful, yet highly deceptive, and it draws its energy from practices and experiences that are foreign to traditional evangelical Christianity. The path that the emerging church is taking is leading right into the arms of Roman Catholicism and ultimately to an interfaith perspective that has prophetically profound ramifications.

This latter-day deception has impacted every evangelical and Protestant denomination to one degree or another, and it is worldwide. The sheep have been led astray by shepherds who have neglected what they have been called to do—protect the sheep.

The Good Shepherd Calls brings clarity to what this delusion looks like, why it is happening, where it is headed, and what can still be done to warn believers and unbelievers alike.

This book is about following Jesus Christ, the Good Shepherd

The Good Shepherd Calls brings clarity to why this delusion is happening, where it is headed, and what can still be done to warn believers and unbelievers alike.