(4/5)
Product rated : BOOKLET - Critical Race Theory, Southern Baptist Convention, and a Marxist "Solution" That Will Not Work This is a very informative... 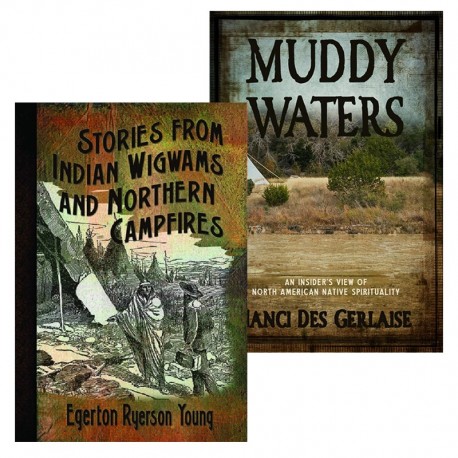 496 Item in stock items in stock

Many Christians see no problem combining the beliefs and practices of Native American Spirituality with their view of Christianity. But Nanci Des Gerlaise knows differently. Raised on a Metis settlement with fifteen brothers and sisters, Nanci's childhood and young adult life was riddled with terrors that come with being the daughter and granddaughter of medicine men. Muddy Waters tells the story of this Cree Native American woman, who after years of struggle, oppression, and spiritual darkness found light and truth in the One who offered her freedom.

But Muddy Waters is not just a biography. It delves deeply into the framework of Native Spirituality. While Native American Christians are looking for a great spiritual awakening within the First Nations/Native American groups--by incorporating Native Spirituality practices into their Christianity--right under their noses, a massive worldwide deception is swiftly surging forward. Partly in overcompensation for very real injustices committed against Native Americans, Native Spirituality has become politically correct inasmuch as traditional biblical Christianity is on a fast track to becoming politically incorrect. Sadly, in the process, the Gospel, which is "the power of God unto salvation" (Romans 1:16) is being pushed aside, as if it were to blame--leaving countless numbers of people--both Native American and non-Native--without the sure hope that only comes through knowing Jesus Christ.

There are no coincidences in God’s kingdom. I’ve been reading Nanci Des Gerlaise’s book Muddy Waters and finding it informative and enlightening. Last week I came to work at my job as my church’s administrative assistant and found a distraught young woman waiting for help. She quickly told me that she was looking for a place of peace because the ancestors were very upset. She explained that because of ongoing construction at a Native American gravesite near her home the spirits had relocated to her house to let someone know they were mad. She went on to describe the frightening paranormal activity which was manifesting around her and through her. If I had not just read of the strange and frightening demonic occurrences that plagued Nanci’s childhood as the daughter of a Native American shaman, I probably would have assumed this lady was suffering from some sort of mental illness. Instead I was immediately alerted to the spiritual forces that were waging war around her. She was surprised that I believed her and didn’t think she was crazy. I was able to pray with her and explain the biblical truth behind what she was experiencing.

I only wish this encounter had had a happy conclusion. Though my pastor spent several hours talking with her and sharing the gospel, her response was that she did not need a Savior; she just wanted the spirits to go. Her Native American husband had instructed her to go visit the local tribal elder for help and that’s where she was headed when she stopped by the church. We have not seen her since but we will continue to pray for this woman that she will be freed from the bondage that holds her and come to repentance and a saving knowledge of our Lord Jesus. I know there is still hope for her in Jesus.