(5/5)
Product rated : BOOKLET -God's Word Through It All These pamphlets "through it...
All reviews 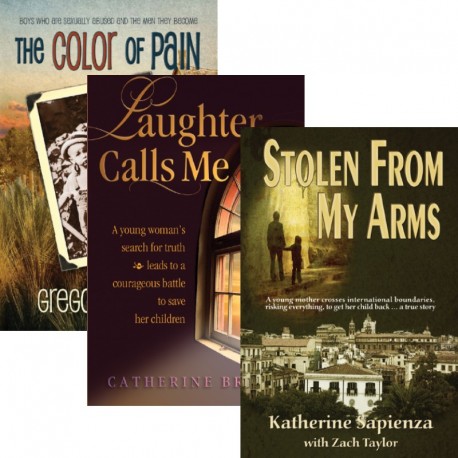 THE COLOR OF PAIN

When Katie Sapienza's six-year-old son is kidnapped by his estranged non-custodial father and taken to a foreign country, Katie's world falls apart. Leaving her California home and her supportive and frightened parents, Katie, in a state of panic and near hysteria, hops on a plane and flies half way around the world. She presents a meaningless warrant for Massimo's arrest to the Italian court system, but is immediately "legally" assaulted by them. She is shocked to learn that the Italian judge on the case has sided with the father and makes it clear that Katie is not welcome there, nor will they return her son to her.

In despair, anguish, and heartbreak, Katie, who does not know of God's love and Christ's sacrifice, decides she must remain in Italy, figure a way to support herself, and develop a plan to get Alex safely back to the U.S. In her desperation and grief, Katie turns to alcohol and sedatives to make it through each torturous day and sleepless night. Forbidden unsupervised access to her son, kept under the watchful glare of suspicious Italian relatives, and emotionally withering under the barrage of false accusations and misrepresentations, Katie suffers both regular anxiety attacks and deep depression. Plan after plan to legally retake her son fails. Days turn into weeks, and weeks into months. When three years have passed, Katie now realizes she will never get her son back--at least not through the Italian legal system. She decides she must take a different course of action--a dangerous one, a very dangerous one, but this is her son, and she must do this.

When she is introduced to an international team of covert operatives who specialize in rescuing kidnapped children, she arranges a secret meeting and pleads with them to help. The paramilitary team are committed Christians, and their hearts go out to this mother who has been driven to the edge of madness through the ordeal. If the money can be raised for the expensive and risky rescue attempt, they agree to do it. Their hope and prayer is that they can not only return to Katie her beloved son, now nine years old, but also lead her to the One who can rescue her as well from the anguish and desperation of her soul.

The true story of a young woman who discovers her children have become victims of child pornography. A compelling and hard-to-put-down book that takes the reader through a twenty-year period in the author's life. From her hitchhiking days in the seventies to being abandoned with four small children to raise, the story then takes a dramatic twist as she discovers what could potentially destroy her family. This crisis forces the young mother to go into hiding with her children to protect them.

THE COLOR OF PAIN

One in every six boys is sexually abused. That's just the ones who eventually tell their secret. The Color of Pain speaks to the professionals, pastors, and loved ones as well as to the boys and men who were abused. And who better to write a book like this than one of the victims who has lived the pain and later experienced the healing through Christ. The Color of Pain is a combination of some of the facts that most don't think about and some of the pain that most won't talk about. Whether you are one of the abused or someone who knows someone abused, this book is a moving and necessary read.