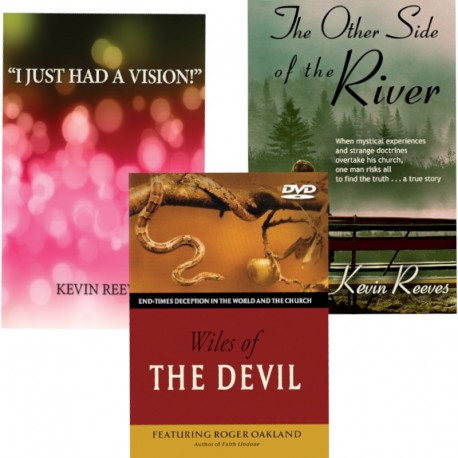 249 Item in stock items in stock

WILES OF THE DEVIL (DVD)

the major battle mankind faces is not in flesh and blood but instead is against beings from an unseen spiritual dimension. The Bible also tells us that Satan is the master planner of this deception and that he has a number of clever schemes to deceive the whole world—believers and unbelievers.

In Wiles of the Devil: End-Times Deception in the World and the Church, Roger Oakland unmasks Satan’s most effective plans in operation today, deceiving billions of people from not believing in the Gospel of Jesus Christ. Further, he shows how even Christians have been influenced by Satan’s clever schemes to make them ineffective in these last days.

This message provides a wake-up call to our present generation to turn away from the “wiles of the devil” and to turn back to God’s Word, which is a light unto our path.

Roger Oakland is an author and lecturer who speaks internationally on a variety of topics relating to the Bible and science, the defense of the Christian faith, and the deception the Bible predicts will characterize the last days.

THE OTHER SIDE OF THE RIVER (BOOK)

A compelling and deeply personal account of a young man's spiritual plunge into a movement called the "River." Sometimes referred to as the River Revival, the Third Wave or the Latter Rain, this movement is marked by bizarre manifestations, false prophecies and esoteric revelations. Warnings of divine retribution hold many adherents in a bondage of fear, making them afraid to speak out or even question those things they are taught and are witness to.

In a biographical setting, The Other Side of the River, is a powerful and needed warning to the body of Christ. In a day and age when church-growth techniques mixed with mystical practices are leaving a wreckage of human lives littered with the debris of false doctrine. For Kevin Reeves, his determination to rescue his family came to the forefront, even if the cost was high and even if he had to stand alone. His journey back into the freedom and simplicity of Jesus Christ would be worth the price.

"I JUST HAD A VISION!"(BOOKLET)