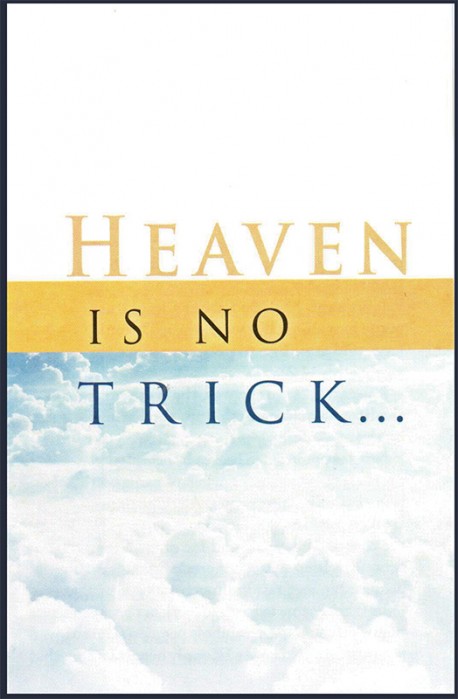 SEE FULL TEXT OF TRACT BELOW

24 Item in stock items in stock

Full Text of Heaven is no Trick, Hell is no Treat

Heaven isn’t a fairy tale like the one you heard about Cinderella or the Three Little Pigs. It’s not just lots of whatever you consider the most fun either — pizza and friends, binge watching your favorite show, bags of candy or sports championships. And it isn’t for good people. It’s all about who’s there. Heaven is where God is.

Jesus said, “In My Father’s house are many mansions: if it were not so, I would have told you. I go to prepare a place for you” (John 14:2).

None of us can get to heaven by being “good people,” going to church, giving to charity and being basically polite people. All those things are nice, but God’s penetrating vision sees to the core of who we are and He says, “There is none righteous, no, not one” (Romans 3:10). And because He loved us too much to leave us that way, Jesus Christ came to earth to work out a way so that a holy God could forgive unholy people. “God so loved the world, that He gave His only begotten Son, that whosoever believeth in Him should not perish, but have everlasting life” (John 3:16). God opens up His home, heaven, to anyone who will believe in Jesus Christ and what Jesus did to wash away sin — sin is choosing our way instead of God’s — and its consequences. Now God tells us to “believe on the Lord Jesus Christ, and thou shalt be saved” (Acts 16:31).

Hell isn’t a word to show you’re really serious in a sentence, to curse another person, or a place to have a great time with friends. It wasn’t created for cute costumes and scary faces that send thrills up the spine either. This isn’t where angry parents or teachers send kids who don’t do their homework. And it isn’t just an extension of what might be a very miserable life that some people refer to as “hell on earth.”

Hell was created for the devil and his angels and is a place of torment. But it is the only forever destination available for those who refuse the salvation God offers.

“I saw a great white throne, and Him that sat on it, from whose face the earth and the heaven fled away; and there was found no place for them. And I saw the dead, small and great, stand before God; and the books were opened: and another book was opened, which is the book of life: and the dead were judged out of those things which were written in the books, according to their works. And the sea gave up the dead which were in it; and death and hell delivered up the dead which were in them: and they were judged every man according to their works. And death and hell were cast into the lake of fire. This is the second death. And whosoever was not found written in the book of life was cast into the lake of fire” (Revelation 20:11-15).

Those who refuse God’s way of being in His home will eventually find themselves in a place without Him — without His love, mercy, goodness and grace.

22 other products in the same category: