(5/5)
Product rated : "I Am Safe" Parent/Teacher Companion Book I allowed a friend to read...
All reviews 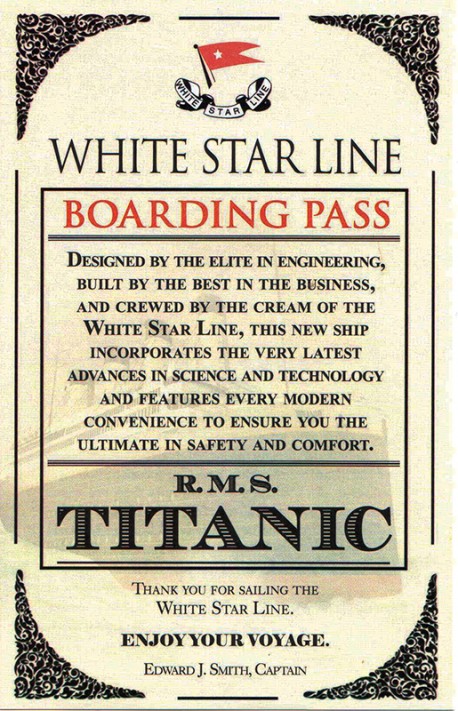 SEE FULL TEXT OF TRACT BELOW

23 Item in stock items in stock

What you see on the front of this leaflet is a simulation of the original Boarding Pass for the Titanic. For many, it was a genuine ticket to death.

It has now been about 100 years since the passengers and crew of the famous and ill-fated Titanic set out from Southampton, England — bound for New York, USA — with very high expectations. For a few days, all went well. Then, disaster! The ship struck an iceberg in the dead of night and sank in less than three hours — and more than two-thirds of the 2,224 people who had been aboard went down with the ship.

The welcome message on the Boarding Pass is not historical, but it might well have been. It represents the unjustified optimism and misplaced trust which many had in the Titanic and which has characterized and disappointed so many people for thousands of years.

They make elaborate plans. They set out with great expectations — only to meet with disappointment, or worse. How many of the Titanic passengers would have abandoned the ship before it sailed had they known what you know — that the ship was doomed? But, they didn’t know. They believed what they had read and had heard. And, had they heard otherwise, would they have believed it?

Now, friend, please hear this: This world is a doomed ship — just as certainly as
the Titanic!

Men have tried their best and done their worst. Many today are desperately occupied with trying to improve a world which they recognize is in very bad shape and getting worse. Scientists, politicians and religious leaders abound with suggestions, and many around us are making frantic efforts to plug the holes and to paint the ship. Others are just as desperately pursuing passing pleasures — apparently indifferent to current conditions and to coming catastrophe.

All are doomed — by sin:

Because of sin, this world, and everybody in it, faces judgment:

“The times of this ignorance God winked at: but now commandeth all men everywhere to repent: because He hath appointed a day in the which He will judge the world in righteousness by that Man whom He hath ordained; whereof He hath given assurance unto all men, in that He raised Him from the dead” (Acts 17:30-31).

The Titanic did not have adequate lifeboats and there was no help at hand when the ship went down.

But because Jesus died and rose again, there is hope and immediate help:

Just as the radio operators on the Titanic sent out an SOS (Save Our Souls) call for help, so you, my friend, may call upon God for salvation:

“Whosoever shall call upon the name of the Lord shall be saved” (Romans 10:13).

Those who trusted the Titanic and its promoters were disappointed. Many of them were doomed. The Lord Jesus Christ cannot fail, and He will never disappoint you. He is worthy of your trust. Today …

“For God so loved the world, that He gave His only begotten Son, that whosoever believeth in Him should not perish, but have everlasting life. For God sent not His Son into the world to condemn the world; but that the world through Him might be saved. He that believeth on Him is not condemned: but he that believeth not is condemned already, because he hath not believed in the name of the only begotten Son of God” (John 3:16-18).

22 other products in the same category: