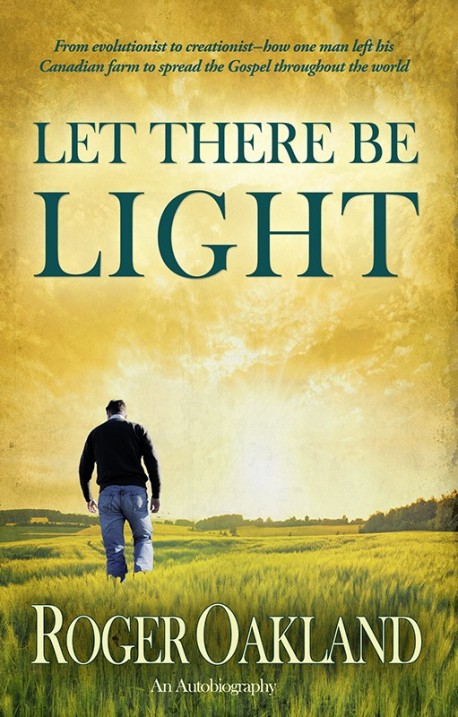 The biography of Roger OaklandFrom evolutionist to creationist, how one man left his Canadian farm
to spread the Gospel throughout the world.

132 Item in stock items in stock

This book can be found in the following sets:

OVERVIEW: Roger Oakland heads to university with the morals and values of his Christian parents intact. When he enters school, he believes in God as a Creator, but soon exchanges this for Darwinian evolution. After graduation, he begins teaching biology (with an emphasis on evolution) at the same university. Challenged one day by a young Christian student, Roger mocks the whole idea of Creation and God.

Through a series of painful circumstances, including the death of a baby son, he begins searching for answers to life - until one day he has a dramatic experience when hit with the realization that God created everything.

Becoming a creationist and later a committed born-again Christian, Roger's life is radically changed, and he is filled with a passion to tell others about God. Little does he know at the time that he will travel throughout the world to share his message.

Through his research, he finds a connection between evolution and the New Age. He discovers that multitudes of people are rejecting the idea of a Creator God and replacing it with an impersonal panentheistic "God." Much to his alarm, Roger learns that New Age concepts, such as this evolutionary "God," are being absorbed into mainstream Christianity.

As time progresses, Roger realizes that the Christian church is heading down a dangerous road of apostasy. He comes head to head with Christian leaders whom he learns are guiding believers toward a one-world religion via the Roman Catholic church through mysticism and the emerging church.

The cost of telling the truth and warning the church is high for Roger Oakland. Within his own denomination, Calvary Chapel, he begins to see signs of spiritual deception. He works tirelessly to teach and warn about the coming apostasy. Eventually, he realizes that both he and his message are being rejected by leaders of the movement that he tried to support for so many years.

From the wheat fields of Saskatchewan to the classrooms of evolutionary humanism, to a fallen USSR to poverty-stricken villages in Myanmar, Roger shares his message to over 130 countries. This apologetics biography will inspire you to give all for the sake of Christ and His Gospel.

Topics This Book Addresses:
Biblical creation versus Darwinian evolution
Russia's openness to the Gospel after the fall of the USSR
A plan by the Catholic church to absorb Protestantism
The connection between evolution and the New Age
How the Christian church is being lured into a one-world religion that is prophesied in the Bible
Contrasting the Light of the World to the darkness of this age
The role mysticism is playing in end times deception
How Christian leaders are ignoring the study of Bible prophecy

I loved this book. I empathized so much with the author when he was ostracized because of his warning ministry. I did wish there were a little more follow up on his wife and his relationship after he became a Christian, since their turmoil was a big part of the time when he was not a Christian. This book seriously has such a great message for young people today and I plan to give it to my older teenagers.


Very interesting - quite a life!

Could Not Put it Down!

I could not put this book down! It was so riveting to learn that Roger Oakland did not always believe what his parents taught him about the Lord. I bought this book because I heard RO make references to his life during conferences that I watched on YouTube. He shares how he was convinced that his parents were not as enlightened as he and the things he learned in college were all true. He even made a career out of it! I was amazed this person was actually the same person speaking at conferences!

He also sheds light on what was going on at Calvary Chapel and how just a few people were turning it upside down. Thankfully, not all Calvary Chapel pastors followed the "new" Calvary Chapel. They still choose to teach the Word of God verse by verse - correctly.

Buy this book. You will enjoy it, you will learn from it, and you will be convinced that the Lord never gives up on us.

I live on the east coast of the US, and am not all that familiar with the politics/controversy of Calvary Chapels. I did visit a few when vacationing to see relatives in CA, so I know they are not cessationists. After finishing the book, I went to the website run by Oakland's ministry, and it isn't clear to me whether he's decided to throw the baby out with the bathwater based on what's on the site. I'm very glad when people like him speak up when people deviate from God's word. Refusing to test the spirits is an enormous problem now -- but I couldn't tell whether he'd decided the gifts of the Holy Spirit are no longer valid. That would have been helpful to know. The last days of people being lovers of selves are upon us, and the discerning can see the manifold ways this is affecting the church. What the "self" is experiencing and feeling has become the standard, and belief in the power of collective "self" has resulted in a Humanism that delights to displace God and his word with a certainty we have no need for salvation, and can solve all the world's problems if we just come together and recognize our inherent divinity and the "unity" in all. People still hunger for "spiritual" experiences, however, which the enemy is more than happy to deceive them with. This book provides a testimony of how that is playing out in real time, and it's only going to get worse. May many more speak the truth in love.

Wonderful biography of Roger Oakland and his journey from wheat farm in Canada, on to college where he got indoctrinated into evolution. After being deceived for years finally found the TRUTH in Jesus and went on to share him with the world, basically! Keeps your attention as you follow Roger on his life's journey! Good book to share with others!

Verified What I Have Discerned

Just finished 'Let there be Light' by Mr. Roger Oakland. I am so glad I ordered this book! He just verified for me what I have discerned over the past years about 'institutional churches' that are going so far down the slippery slope of apostasy. I am ever so grateful that Mr. Oakland remains a 'watchman on the wall'. I know that he will hear "Well done, good and faithful servant" on the day he stands before our Lord and Savior Jesus Christ. He has been very instrumental in my discernment over the years with his books, of which I have almost all. I remain grateful for his service in the name of our King. I am ordering more copies to be given to friends. Thank you.

17 other products in the same category: