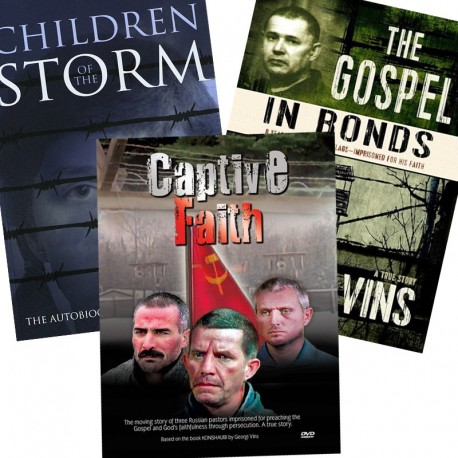 CHILDREN OF THE STORM

THE GOSPEL IN BONDS

CHILDREN OF THE STORM

A TRUE STORY - Natasha's father is a leader in the underground church of the Soviet Union. When Georgi Vins is forced to spend time in hiding and in prison, Natasha looks to her beloved grandmother for spiritual guidance, but in her teens Natasha reaches a spiritual crossroads. In a homeland that demands that she embrace communisitic ideals and deny the existence of God, will she follow Christ into a life of poverty and hardship, or will she renounce her parents' Christ for the opportunities and open doors which higher education has to offer? FOR YOUNG ADULTS/ADULTS

THE GOSPEL IN BONDS

Georgi Vins, a Baptist pastor living in the U.S.S.R., was 37-years-old the first time he was imprisoned for his faith in a Soviet prison camp. He left behind his wife, his children, and his church. Over the course of thirteen years, Pastor Vins spent a total of eight years in the gulags.

But in the pages of this book, you won't read about a man who felt sorry for himself or who wallowed in the misery of his sufferings. Rather, you will hear the true stories of believers whose faith in Jesus Christ took preeminence in their lives and who allowed nothing, not even a Communist government, to take away their faith and their hope.

Threaded through The Gospel in Bonds is an intricately woven theme of love for God's Word and faith in the Gospel, even in the midst of severe punishment and deprivation.

The pages of this book will give you insight into the mind of a man uniquely used by God and encourage you to an ever-closer walk with the Savior, Jesus Christ!

In Captive Faith, three Russian pastors imprisoned for preaching the gospel, find themselves together in prison camp. God uses them to begin a church in prison.

This true story shows God's providence and His strength in persecution.

Incredibly convicting! Really makes you take a step back for some inner reflection. Great lessons for our youth to learn as well. Our whole purpose in life is to bring glory to the Lord, in our own lifetime. Good reminder.

16 other products in the same category: