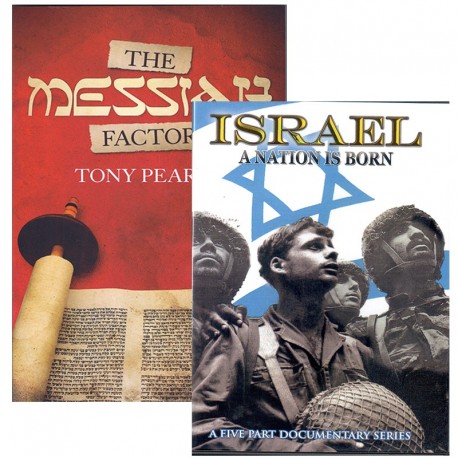 The Messiah Factor/Israel: A Nation is Born (BOOK/DVD SET)

It chronicles his recollections of, and his part in, the creation of the State of Israel in 1948, the subsequent conflicts, including the 1967 Six Day War and the 1973 Yom Kippur War; the Egyptian--Israeli peace treaty and the events of the last decade.

Having worked as a school teacher in north west London and now running a Christian fellowship in Golders Green area of London, Tony Pearce has had many opportunities to discuss the issue of the Messiah with Jewish people.

Who do you say that I am? was the question Jesus asked the disciples.

Why has the professing Church often persecuted Jewish people?

Where was God when the 6 million perished?

If Jesus is the Messiah, why is there no peace in the world?

Do events in the Middle East today tie in with the prophecies of the Bible and if so how will they end?

What clues do the Hebrew Prophets give to Messiah's identity?