(4/5)
Product rated : BOOKLET - Critical Race Theory, Southern Baptist Convention, and a Marxist "Solution" That Will Not Work This is a very informative...

(5/5)
Product rated : BOOKLET - Five Things You Should Know About Contemplative Prayer This was a succinct yet...
All reviews 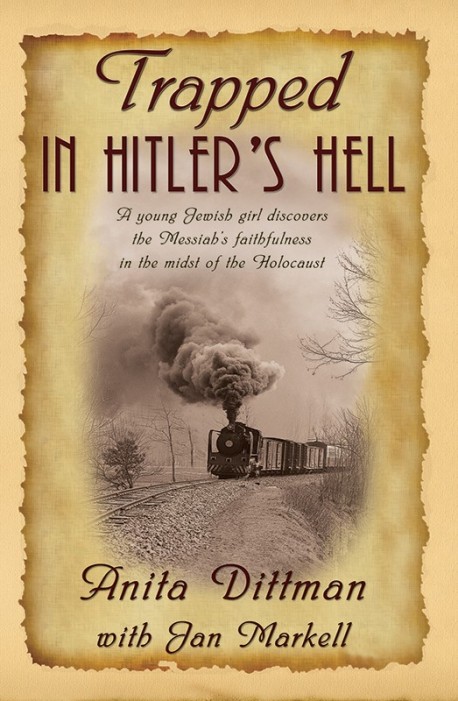 By Anita Dittman with Jan Markell

Anita Dittman was just a little girl when the winds of Hitler and Nazism began to blow through Germany.

348 Item in stock items in stock

Description: Anita Dittman was just a little girl when the winds of Hitler and Nazism began to blow through Germany. Raised by her Jewish mother, she first heard about Jesus when she was just six years old. By the time she was eight, she came to believe that He was her Messiah. By the time she was 10, the war had begun. Trapped in Hitler's Hell is the true account of holocaust horror but also of God's miraculous mercy on a young girl who spent her teen-age years desperately fighting for survival yet learning to trust in the One she had come to love. You will never read another story like this one, and you will be changed forever through the life of this courageous and lovely young woman.

Table of Contents and Chapter 1

"Will sweep you into 1930s Germany and back with your faith intact ... [Trapped in Hitler's Hell] carries a stark message for today's Western Christian ... will refocus your priorities and recharge your spiritual life."
Leo Hohmann, former editor for The Messianic Times


WHAT OTHERS ARE SAYING ...

Trapped in Hitler's Hell is a first-person account of a young German Jewish girl's trials, tragedies and triumphs in the years before, during and after World War II - a wonderful book on so many levels, appealing to every aspect of soul and spirit. First, it's a cliff-hanging adventure story to rival the finest I've ever read. I found it nearly impossible to put down.

Second, it's intellectually satisfying for anyone who's fascinated by modern European history, by a world that allowed Hitler to put his demonic plans into motion, and especially by what it must have been like to live through such terrible times. Third, it's a love story that captures, in well-chosen and well-told vignettes, a daughter's devotion to her mother.

Fourth, it's a story of a rock-solid belief in happy endings, a belief that may appear baseless but seems to be its own reward through unimaginable ordeals. Finally, and most importantly, it's a story of complete faith in the Lord Jesus Christ - in the childlike trust He wants us all to have as we labor through earthly lives that are plagued by loss. It is in fact a story that shows us precisely what it means to live for the Lord ... and to take Him at His word when He promises, "I will never leave you nor forsake you."

I was amazed at the description and the emotion of what took place [in Anita's book]. I don't usually cry with books, but at the end when Anita was at the concentration camp awaiting word if her mother was alive or not....I was crying and trying not to peek ahead of what happened. I thought, "Lord, did you take her all that way only to have her mother gone?!" ... Please let Ms. Dittman know that this missionary in _______ truly loved her autobiography and how God was given all glory in her life, even when her life circumstances were not glorious. Thank you also for publishing this book. I plan on having my teenage daughters also read the book now as well. Johanna, missionary

My only criticism is that, at 1 pages, Trapped in Hitler's Hell is too short. The author has done a magnificent job of giving readers just enough detail to feed our imaginations, without bogging us down. But as quickly as I raced through its pages, desperate to find out what happened to this daughter and her mother, I was very sad to turn the last page. I did not want this girl's story to end. Come to think of it, thanks to her relationship with the Messiah Himself, her story never will end.

Many thanks to Anita Dittman and her talented memoirist Jan Markell for an unforgettable book! Kitty

The story of this young girl is simply amazing! The strong faith she had and the love for her Mother, inspiring! A history lesson for students to read in school!

This book is such an eye-opener as to how Hitler ruined the lives of many people in Germany and many other nations. The horrible conditions that people lived under even when not in Concentration Camps is horrifying. This is a must read for us blessed Americans.

I loved reading of the Good Shepherd's faithfulness to Anita from an early age. She recognized through the Spirit of adoption that she had a heavenly Father through Jesus. No matter how treacherous the circumstances, she could cry out to Him. Like the Ten Booms, Anita and her mother and loving neighbors walked through a dark part of history and made it His story shining with light.

Anita's story was too short. I could not put it down. I gave my copy to the Woman's
Bible study Leader as a potential source for their study group.They will love it. I ordered a second copy because it will always be in my library. Thank you for the foresight to have it available. PTL Bob

Although some of the horrific details of the Holocaust are mentioned, the focus is more on Anita Dittman's faith and trust in God and His care for her. An amazing and memorable story.

great quality and service. easy to deal with

I've read many, many books about the Holocaust since I was a young teen. Trapped in Hitler's Hell is probably the most touching, God-glorifying Holocaust book I've ever read. It's right up there with The Hiding Place by Corrie ten Boom. Reading about Anita's love for the Lord Jesus and her complete faith in Him and dependence upon Him, and His protection of her in the midst of hate-filled Nazi Germany is a wonderful testimony that every Christian should read.

purchased for my husband, but I couldn't put it down -

A beautifully written book, told through the eyes of a lovely Christian woman. This unforgettable story begins when she was a young child in Germany.

With historically accurate facts throughout, you feel that you are there experiencing the horrors of war, but also the love and power of Almighty God.

This book tends to touch every emotion with a captivating and beautifully told story. A very superior book in every sense.

I can't read this book without crying and crying. It's a beautiful story of the Lord's faithfulness.