(5/5)
Product rated : The Light That Was Dark Warren's story is amazing.

(5/5)
Product rated : How to Prepare for Hard Times and Persecution This book is excellent and...
All reviews 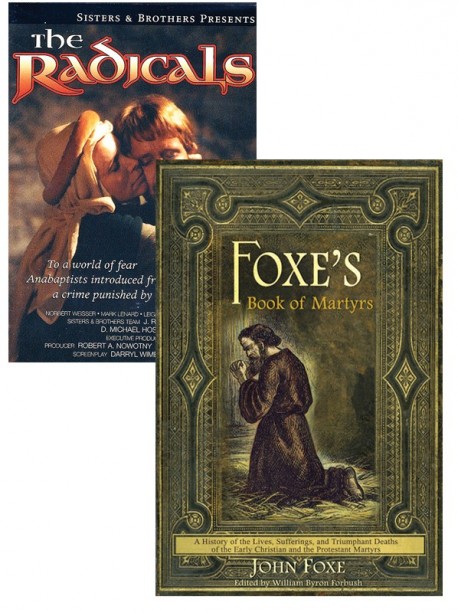 The year is 1525. A nun and a priest flee their religious orders as they become convinced that the Catholic church is not representing true biblical Christianity. A beautiful love story about the two who eventually marry, Michael and Margaretha Sattler seek out the true purity of the Gospel.

The Sattlers join a group called the Anabaptists and risk their lives to defend the true faith. Rejecting the Catholic tradition of infant baptism, they call for baptism to once again become, not a mark of citizenship, but a voluntary decision to follow Christ. As their movement grows, so does the determination of their enemies to stop them...by any means necessary.

Foxe's Book of Martyrs has been an invaluable addition to the libraries of faithful Christians for almost five centuries. Chronicling the suffering and brutal deaths of those who have sacrificed their lives for the sake of the Gospel of Jesus Christ, John Foxe captured the God-given, Spirit-inspired courage of these noble souls. Though sometimes difficult to read because of the inhumane cruelty depicted in its pages, the images which truly endure are the ones which portray the victorious faith, through the grace of God, of these Christian martyrs.

Why should you read this book? The stories within these pages are supremely inspiring accounts of those who gave their lives defending the truth of the Gospel. Much can be learned not only of their fortitude but also of an apostate false church that persecuted them. The powerful witness of these martyred saints will stir your hearts, as it has the true church through the centuries, to be that loyal bride of Christ, strong and pure.

I recently bought Foxe's Book of Martyrs and The Radicals DVD set. I think the two go well together. I haven't read all the book yet. (I noticed Foxe's view of Constantine the Great was more positive than I think we would now way). Between the two items they encourage Christians to stand up for what we believe in and to be prepared to suffer for it... even to death if necessary. For example on page 129 Anthony Ricetti declared "A good Christian is bound to relinquish not only goods and children, but life itself, for the glory of his Redeemer: therefore I am resolved to sacrifice everything in this transitory world for the sake of salvation in a world that will last to eternity." and on being told someone else had recanted answered "If he has forsaken God, I pity him; but I shall continue steadfast in my duty." My friend said she found it a very heavy book and hard to get through, but I haven't as yet.
The DVD tells the life, beliefs and deaths of Michael and Margareta Sattler, influential in the founding of the Swiss Brethren/Anabaptists. I was unable to play it on my computer for some reason. I don't know if living in the UK made a difference. However I was able to play it on my portable DVD player which I think is also Region 2. The DVD warns that it contains historical violence, which is a reasonable warning. I had an unexpected problem with what I would call "suggestive cuddling" They seemed to be caressing, sitting without outer garments in a bedroom type situation.
The DVD helped me understand why they believed what they did regarding non-violence, separation from the state etc and its relation to believer's baptism. I went on to read the book "Pilgrim Aflame" by Myron S Augsburger, which the film was based on. I noticed the events of the movie are different. I think they did this to make sense of the larger picture in Europe and to tie the scenes together. There are some extras on the DVD. My 11 year old, who I deliberately did not show the main movie to, wanted to watch the children's section and then declared it was boring, as I had thought she would. It is Margareta giving a commentary. We did watch the documentary part together but skipped the burning.
I personally am thinking seriously about what is the Church and what is it's relationship to the World. The Anabaptist view is very different from Calvin, Luther, and Zwingli - the last of which opposed the brethren using the same governmental methods as the Roman Catholics did. The DVD helped me think about what my own response in the present day, and in the UK, should be. I also think it could be very relevant if the New Apostolic Reformation crew were to gain power in government. ??

25 other products in the same category: